no blood spread! no last night’s speedy vehicle! and definitely no one tried to cross the road! But still there is blood, blood on our hands! 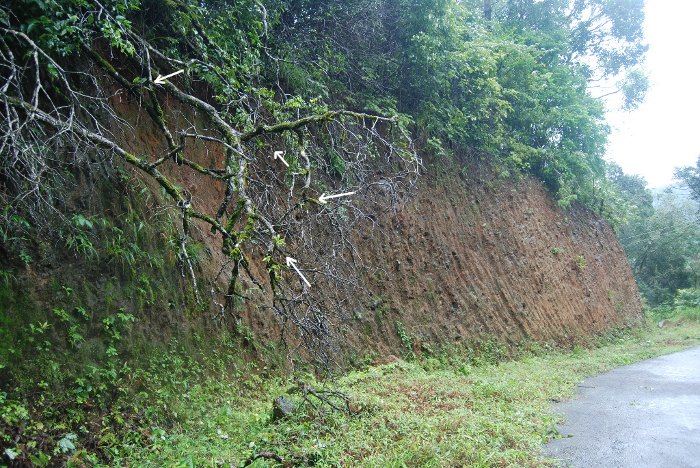 At least six species of orchids on the fallen tree next to road!

Some destructions are the way of Nature keep things in balance, some like roads, plantations, neglects are not. Trees fall all the time. Some of old age, some ‘cos of the calamities like flood, lightning etc. And nowadays mostly due to another type of (un)natural calamity, human activity.

Sometimes you get a feeling that all the ‘thinking’ or ‘will make you smart’ knowledge by the education without foresight and not considering the bigger picture and connection is alienating the very species which is supposed to be a good example of evolutionary process if anyone interested enough to study. When do we stop confusing Knowledge for Wisdom?!

There seems to be another dimension to this act; that of the discipline and self respect! It appears to be lacking more and more as the days go by. We do things just because we can! or rather we don’t have that control over the self to stop as soon as we realise it. Or we have left out the self-respect and the pride of being sensible out and away.

There is a gap in understanding which leads us to not to see the connection between each of the species in the ecosystem. In the top-down view of building understanding unless one spends considerable amount of time reading, most importantly listening to one’s surrounding, it is next to impossible to attain that state of understanding and harmony with surrounding. Blame it on the forgetfulness and ‘ill-respect to traditional knowledge’ of the society or blame it on the selfish economy driven pseudo communities!

The anthropological knowledge developed when the race was small enough where it could sustain easily itself not being thought about now. What’s more, its been blatantly forgotten or overridden. The key to connection and survival, has been with us all the time and it appears like we have ignored it quite nicely as well, no matter what’s our excuse be!